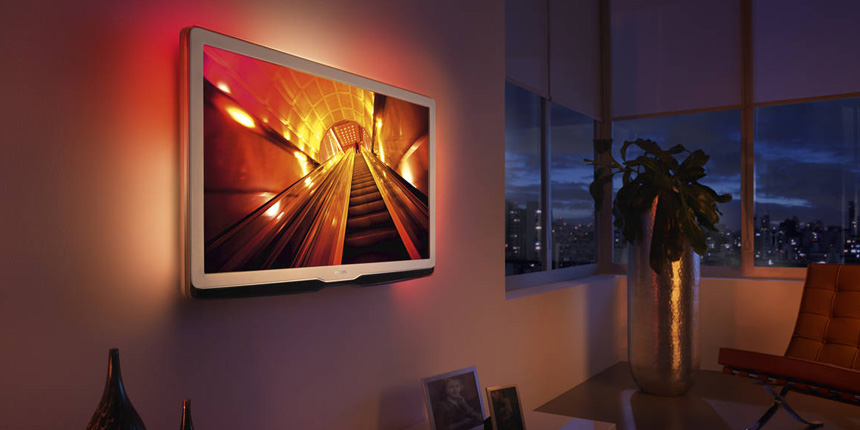 Bias lighting can help reduce the eye strain caused by long exposures to TV screens and monitors in dark rooms, but it can also help make the greys and blacks on your screen seem richer. With Bias lighting is placed behind a TV to increase the ambient light around the screen without shining more light in viewers’ eyes.

We can install a low energy colour changing system behind your television or cabinet, in fact you could LED light just about anything. Have a look at the videos below to give you an indication of what is achievable.

You can shift automatically between 7 different colours or select one at a time. LEDs consume up to 85% less energy and last 20 times longer than incandescent bulbs, emit low heat and can be used in narrow spaces such as behind AV equipment.

Control of the bias lighting can either be via a supplied IR remote control or app on your smart device, and can even be voice controlled with the use of Amazon Alexa and Google Home.

Depending on the size of your TV, we can calculate the number of LED lights you need to fill the rear of your screen. Smaller light kits tend to run around 5ft in length. That’s adequate for a smaller TV, or even a larger computer monitor. But for a super-giant 85” LED television, you’re going to need LED strips that are sized to match.

Lights need to be powered somehow. In a lot of cases, LED backlights are made so you must run a separate power adapter for the lights. That’s okay, since LEDs don’t draw that much power, and you’re running the adapter in a place where you might already have another wall socket to use. But some LED bias lighting can be powered through USB. In most cases, that’s much simpler for people who have a spare USB port on their TV.

It can be useful to have different colour options at your disposal. Some LED bias TV backlighting is made to only provide a small range of colours, sometimes as few as 10. Others provide an unlimited range. But as you’d probably expect, having multi-coloured LED is typically a bit more expensive than those with more limited operation. So, going with simple white LEDs can often save you a few pounds.